July 22, 2012
On our third day in Port Elizabeth we decided to do another walking trail, The Richmond Hill Trail.  The information about this trail is in the same booklet as the Donkin Heritage Trail.  This trail is a bit shorter and the sights are closer together.

We did this walk on Friday 27 April.  It was a public holiday in South Africa and the streets were empty and the neighbourhoods quiet.  We could take our time to see the houses and read about the history of each site while walking around.  The weather was not great but at least it did not rain.

I have already written about some of the sights in this tour like the Charmouth and Sherlock Street Terrace Houses.  Here is some more of the sights we saw on this tour.
﻿This building was opened in 1903 as a home for destitute aged women and was named in memory of Queen Victoria.  It is now used by the PE College.
The Society was formed in 1861 to help destitute people especially the aged. The first cottages were built in 1887.  More cottages were added until the 1960’s.
﻿ ﻿ 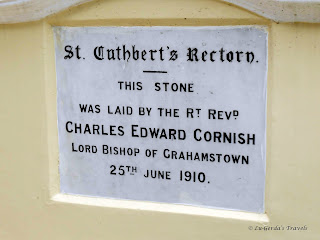 St Cuthbert’s Rectory was built in 1910 and is the only house in PE with a foundation stone. It is now a restaurant.
﻿This park used to be the Mfengu cemetery when the Mfengu settlement still used this site.  The outbreak of bubonic plague in 1902 caused the closure of the location. ﻿ ﻿ 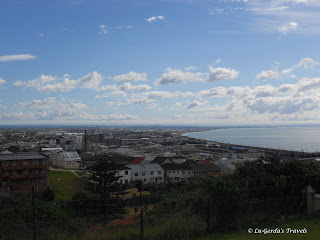 The school was started in 1883 by Miss Mary Anne van Wyk in her home and after growin git moved to this building in 1903.  The school moved again in 1981 and the building in now used by the PE College.
﻿St Philip’s was started as an Anglican Church for Dutch speaking people in 1884.
﻿
﻿
This house was built in 1904 and has a beautiful wood veranda and balcony.
Eastern Cape Port Elizabeth