Dorp or “Town” Street is one of my favourite streets in Stellenbosch.  I love the beautiful old oak trees that line the street along with all the old homes with their interesting gables, windows, doors and stoeps. 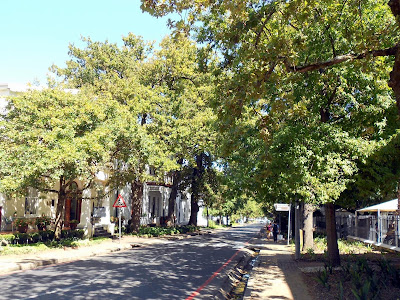 We started our walk at the Dutch Reformed Church and walked along Dorp Street until we reached Oom Samie’s Winkel.  The street is very busy but we kept crossing to see buildings on both sides.
The land was granted to Pieter Andriesz Saxe in 1704 and he probably built the original Saxenhof house.  In the late 19th century the house was extended to a double storey with the interesting wooden balcony.
After the original building was destroyed is a fire in 1803, the present building was built.

This church was designed by Carl Otto Hager and was inaugurated in 1854.  The church fell into disuse and was bought by Dr Anton Rupert.  It was donated to the Stellenbosch University and is used as an art gallery.
This house was built by rev Borcherds in 1798.  It was almost destroyed by a fire in the 20th century and was restored after the fire.

This was my first visit to this interesting and well-known shop in Stellenbosch.  It was named after the dealer who had the business for almost 40 years.  They sell a wide range of items.  We liked the interesting books and souvenirs but it was too expensive for us.  We only bought a fridge magnet to add to our collection.

There are a lot more beautiful buildings in Dorp Street.  Most of these buildings are National Heritage Sites. Later in the day we stopped at the Stellenbosch Tourism Office.  They have pamphlet for a walking tour through historical Stellenbosch.  We would have enjoyed the walk more if we had this guide with us and I would recommend that you get it before walking through the town.  Here are photos of a few other buildings in Dorp Street: