In March we went to Cape Town area for a long weekend.  During this visit we made an unplanned trip to Stellenbosch and decided to explore the town.

I studied at the Stellenbosch University for four years and know parts of the town.  Like most students I did not have a lot of money, my bicycle was my only transport and it was before I bought my first digital camera.  Back then I admired the old buildings but never took the time to take photos of them or learn about their history.  This day trip was a great way to show Stellenbosch to my husband and explore learn about the town.
Governor Simon van der Stel founded the town in 1679 and he named it after himself.  The name can be translated as “(Van der) Stel’s Bush”.  The town is also known as the Eikestad or “City of Oaks” due to the many Oak trees that were planted by the residents after on the recommendation of Commissioner Van Reede tot Drakenstein.

We started our walk at the Dutch Reformed Church or “Moederkerk”.  The congregation was established in 1686.  The church building as consecrated in 1723 after the first building was destroyed in a fire in 1710.  The cross church was enlarged in 1863. 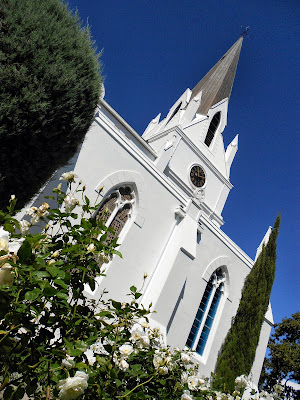 Burials were initially permitted under the church floor.  About 100 people were buried inside the church before the floor was tiled.  In 1801 the first crypts were allowed outside the church building.  This continued until 1849 when the first municipal cemetery was opened. 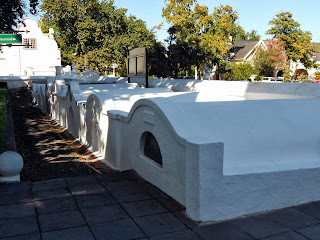 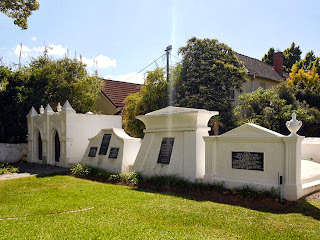 I attended this church while studying in Stellenbosch and it has a beautiful wood pulpit and stained glass windows.  Unfortunately the church was closed and we could not go inside. 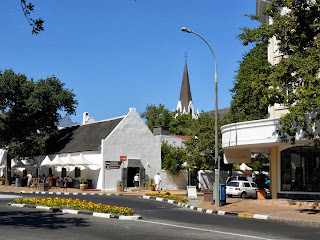