February 01, 2013
In 2008 my friend, Lelanie, and I decided to visit Europe and London.  After our Contiki Tour through parts of Europe we were back in London for a few days.  Our visit to London was at the same time as the Wimbledon Tennis Championship.  We are fans of Wimbledon and we decided to go watch tennis on one day of our trip. 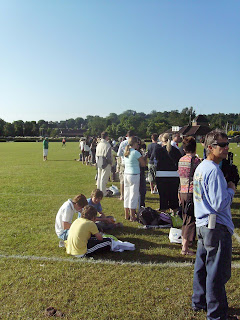 Since rain was predicted for the weekend we decided to go to Wimbledon on our first day back in London.  On Thursday 26 June 2008 we were up at 5 am to go queue at Wimbledon.  We got on the train at Russel Square, changed trains at Earl’s Court and rode to Southfield station.  We were not sure where to go and got some directions before walking to the Wimbledon Tennis Grounds.  We received our queue card and took our place in the row. 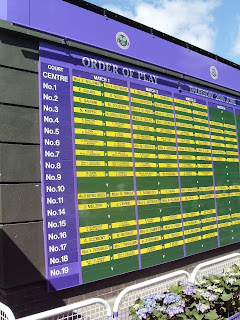 At 9:45 we were almost at the entrance but first had to go through security.  Here we had a problem because they would not allow us inside with the locks on our backpacks.  So we paid £1 to store the 2 locks before we could go further.  The row was now moving steadily forward and after paying we could enter the grounds just as the gates opened at about 10:30.
We decided to go to court 11 and watch the match between M Martinez Sanchez and S Mirza.  It was still early and we found seats and waited for the match to start.  It was interesting to see the whole process.  First the personnel arrived (referee, ball girls and lines people) and the net is put up.  A bit later the players arrived and the coin toss was done.  Then the warm up and eventually the match starts. 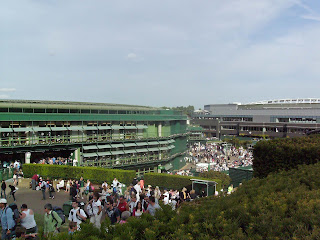 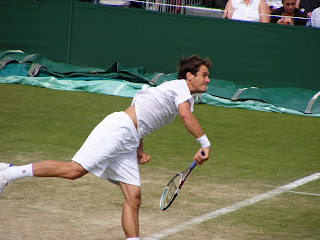 It started to get colder and cloudy and we decided we saw enough for the day.  On the way back we saw that the Williams sisters were playing a doubles match on court 11 and we stopped for a look.  It was very full but we saw a glimpse of them and took a few pictures. 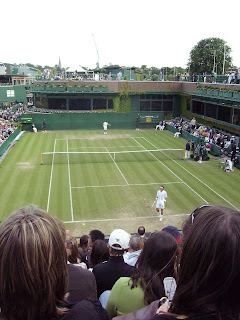 It was about 19:45 when we left the grounds searching for “Left baggage” to get our locks back.  We walked to the tube station and rode back to Russel Square.  We went to buy some food and arrived back at the hotel at about 21:15. 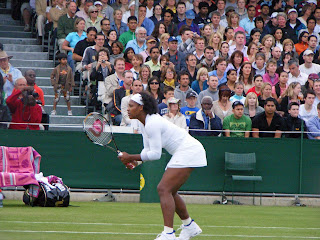