July 21, 2017
On Saturday 11 March 2017 there was no relaxing in our pyjamas or enjoying a lazy breakfast ,  We had to get ready early to go see the departure of “Dominique”.  “Dominique” is locomotive #3322, an oil burner steam engine, that was restored in Voorbaai, Mossel Bay for the CeresRailway Company.

For years my husband would say how sad it is to see all the old trains/locomotives etc just rusting away in the “train cemetery” in Voorbaai.  But the last few years a team has started to restore some of these old locomotives for the Ceres Railway Company.  After the restoration is complete the locomotives are moved to Ceres where visitors can take trips between Ceres and Cape Town.  Before Dominique, they restored “Jessica” a Class 19D locomotive #3321, “Bailey” a Class 19B locomotive #1412 and “Red Devil” a Class 26 locomotive #3450.

Dominique was scheduled to leave Mosel Bay at 8:45 Saturday morning and we arrived at the Voorbaai station at just after 8:00.  We were very happy to see that “Jessica” to Mossel Bay to make the trip back to Ceres with Dominique.  Now we could see both locomotives.

I was surprised at the amount of people who came to look at the trains.  It was difficult to take a photo without people in the way.  Our 2½ year old son was with us.  He was very excited about the trains.  He wanted to touch everything and even tried to climb onto the train.

Unfortunately there was a problem with the water pressure and there was not enough water to fill up both locomotives.  Transnet assisted them by using a diesel locomotive to pull them out of Voorbaai to Heidelberg where they had to pick up a wedding party.  This big red diesel locomotive spoiled a few of the photos but it was very nice to see the old locomotives back in working order. 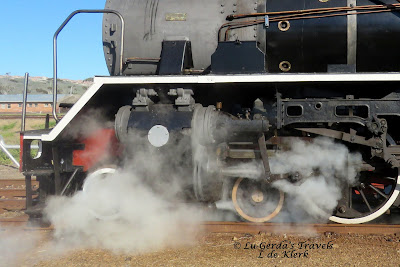 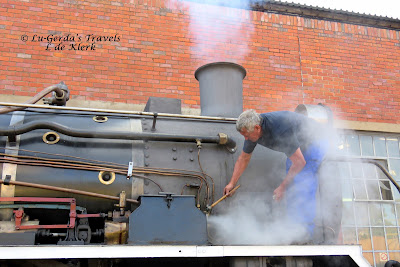 After they left Voorbaai we drove to Mossdustria to see the train at the crossing.  Husband still did not see enough and we drove further to the Gouritz river bridge to see the trains cross before returning home.

I hope they will restore more of the wonderful trains and hopefully one can stay in Mossel Bay for us to take a trip.