July 24, 2012
Here are some more of the buildings we saw on the Richmond Hill Trail in Port Elizabeth on 27 April 2012.
﻿
﻿There use to be a lot of small shops in this area for the housewives who had to do shopping on foot.  Some still remain like C L Jones Grocer. 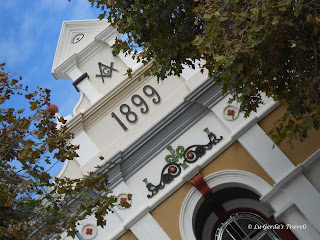 This was the hall of the first Masonic Lodge of the Scottish Constitution in PE and the foundation stone was laid on 17 June 1899.
The Synagogue was built in 1912 for the Jewish Settlers from Eastern Europe and Russia.  Today it is a museum of Jewish history.
The church was built in 1876 as the Edwards Memorial Church but was bought in 1921 by the Dutch Reformed Church.  The tower was added in 1948. 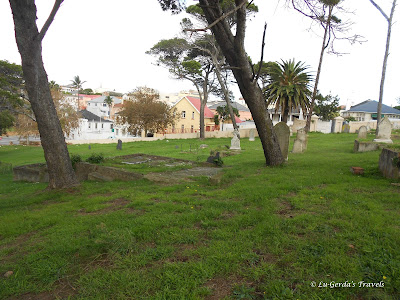 ﻿Three cemeteries were granted on this piece of land:
-         In 1838 to the Union Congregational Church;
-         In 1842 to the Methodist Church and
-         In 1843 to the Roman Catholic Church.
The cemeteries were closed in 1897 but after a lot of vandalism there is not much left.
﻿We did find one interesting grave.  It is the grave of James Langley Dalton who was awarded the Victoria Cross for bravery in defense of Rorke’s Drift in January 1879 during the Zulu war.
﻿
﻿The former Technical College in now used by the Port Elizabeth College. It was built between 1926 and 1928.  I climbed up the stairs to see the detail on the walls but would not recommend it.  The steps are used as toilets and it is gross and smell even worse.
﻿They like long names in PE.  This home was opened in 1899 and could accommodate 12 children.  It has beautiful timber verandas around 2 sides of the house.  It is now used as offices.

At the foot of the Hill in Albany Street there used to be a Church designed by Sophy Gray.  St Paul’s Anglican Church was built in 1854 but was demolished in 1959.  Some of the windows and memorial were moved to the new church in Tucker Street but we did not visit it.

This was the end of the walking trail.  We had a wonderful time in Richmond Hill and learned even more about the history of PE.  Next we went to get some food before going to explore another cemetery.
Cemeteries Eastern Cape Port Elizabeth Sophy Gray Churches