April 01, 2012
Our Swiss holiday was about half way when we got to Bern.  We stayed with Sonja, a friend of sister-in-law Ariane.  On Wednesday 13 July 2011 I woke at 3:00 in the morning.  There was a thunderstorm outside with lost of thunder and lightning and rain.  Mom slept through the whole thing but I laid awake for about half an hour.

We woke later that morning and relaxed.  At 10:15 we walked to the tram station.  The previous night it looked easy to get there but we made a wrong turn.  We missed the Beaumont station but found the Eigerhof station and took the tram to Bern Bahnhof.  At the station we got a map and went on a walking tour of Bern:

1. Bahnhof Platz
The walking tour started at the square outside the station. 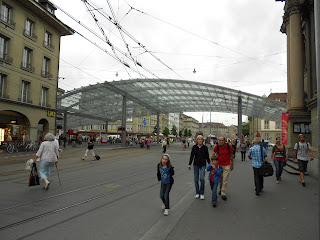 2.  Heiliggeistkirche or Church of the Holy Ghost
The church was completed in 1729.  I loved the baroque interior with sandstone columns, free-standing pulpit and beautiful pastel ceiling. 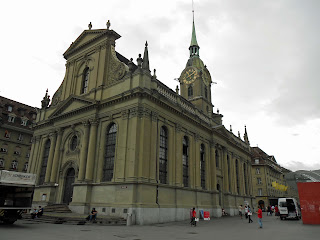 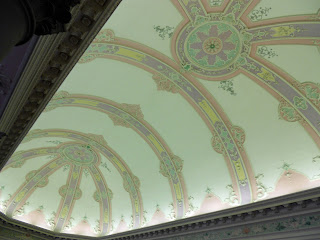 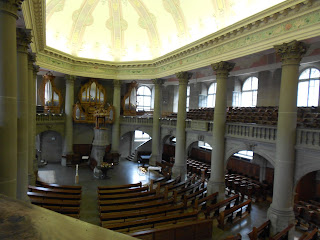 3.  Pfeiferbrunnen or Bagpiper Fountain
This fountain was built in 1545/46 by Hans Gieng and is a Swiss heritage site. 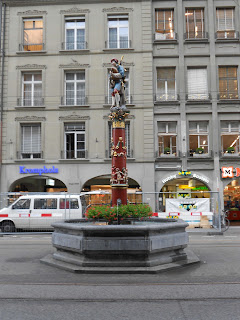 4.  K﻿äfigturm or Prison Gate
The original tower was built as a gate house during the second expansion of Bern in 1256.  It was demolished in 1640 a rebuilt in 1641.  In 1405 the town’s prison was moved to the tower. In 1897 the prisoners were moved and the tower changed to an archive and court and now it is used as a meeting place for people interested in politics. 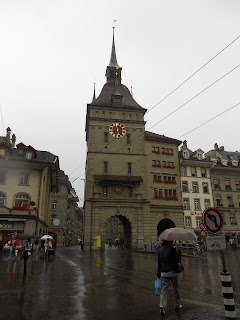 It started raining but we decided to continue with the walking tour.

5.  Marktgasse
This is one of the streets in Bern old town.  The covered sidewalks were very busy because it was raining.  We decided to rather walk in the street.  We did get wet but we could see more of the beautiful buildings. 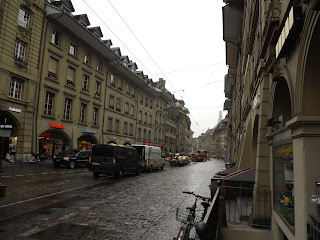 This square was closed for work on the tram/railway line.  We did see the Ogre fountain and Kornhaus.  We walked with a detour to the front of the clock tower.

7.  Zytgloggeturm or Clock Tower
The Zytgloggeturm was the town gate from 1191 to 1250.  The astronomical clock was added in 1405.  Luckily for us it was just before 12:00 when we arrived at the clock tower.  We waited in the rain with a lot of other tourists to see the clock chime. 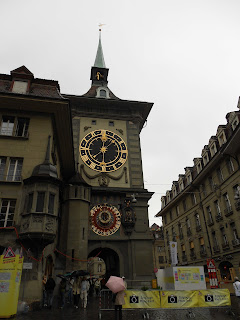 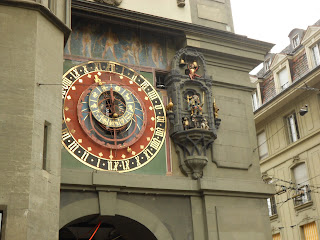